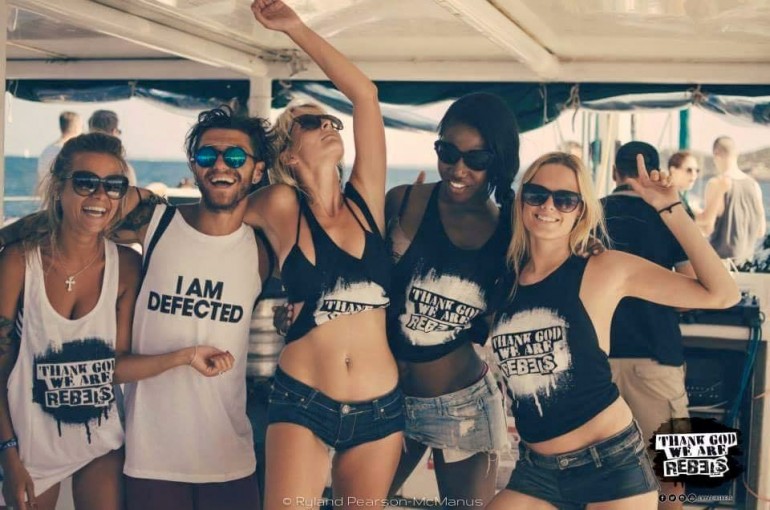 No holiday to Ibiza is complete without going on a boat party. And trust us when we say there is just one boat party worth going on and that’s the Rebels boat party.

Don’t be fooled with cheaper booze cruises and all you can drink gimmicks. With the Rebels you get the real deal. They pride themselves on the quality of the party, from the music to the drinks to the beautiful catamaran boat that sails from the exclusive Marina Botafoch.

The Rebels boat party takes place every Tuesday and Friday. From 5pm until 10pm the boat sails around the island of Ibiza, stopping at Es Vedra and and a hidden coast to watch the famous Ibiza sunset where guests get a two hour swim stop to enjoy the crystal clear water.

The catamaran boasts an impressive sound system and the Rebels’ particular music sound of deep house, deep tech and tech house has brought world famous DJs from top labels such as Minus, Moon Harbour and Desolat to play an intimate gig in front of an audience of 150 guests.

The true rebels spirit doesn’t just come alive at sea. In addition to the boat parties you can catch the Rebels every week in Playa D’en Bossa hot-spot Sankeys nightclub where every Sunday they host the Spectrum with Steve Lawler’s Viva Warriors in the basement. This season will be the second consecutive year the Rebels work alongside VIVa Warriors following a successful collaboration last year. The party is running for 18 weeks until the closing party on the 27th September.

For more information about the Rebels visit their website.