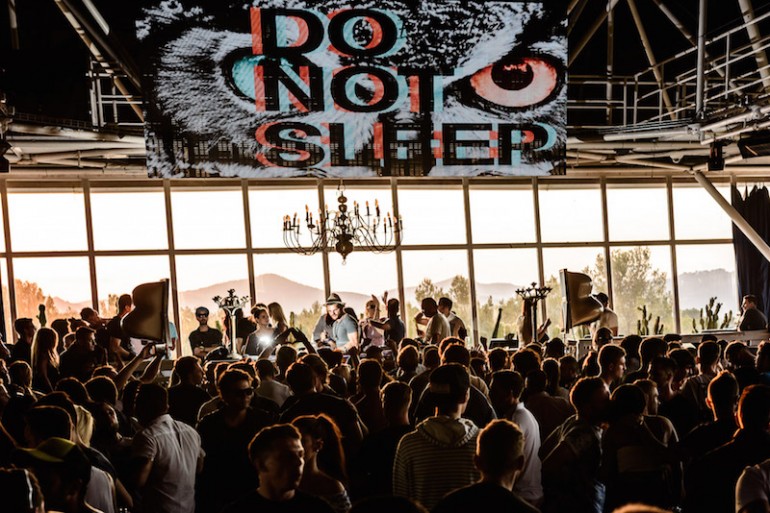 Do Not Sleep is the brand new party night for 2015 that has secured the very special Vista Club in the grounds of Privilege as its home, and the big hitting Darius Syrossian, Santé and Sidney Charles as its residents, is a party for those who like something edgy and different, something fresh and exciting, and for those who want to see exclusive, world class back to back sets from some of the most technically gifted DJs out there.

Do Not Sleep kicked things off at Vista Club on the 14th June, with a pre-opening party appearance by huge Italian act Flashmob along with Jasper James, as a welcoming gathering for the Do Not Sleep crew.

This special party set the tone for the mouthwatering, carefully curated line-ups to follow over the rest of the season. The official opening party took place on the 12th July when globally acclaimed star Totally Enormous Extinct Dinosaurs (dj set) dropped in plus there was a special B2B that joined the proceedings alongside residents Darius Syrossian, Santé, Sidney Charles and Bones.

Sunday 19th then found US house star and Objektivity boss Dennis Ferrer headlining, before the UK techno duo from Hotflush, Dense & Pika, then play on the 26th alongside Marquis Hawkes.

Now we are into August and the 2nd finds Leeds legend Paul Woolford headlining with Nathan Barato also spinning. A week later on the 9th, chart topper and Aus man Breach is joined by Houndstooth associate and ghetto house producer Marquis Hawkes. The 16th then finds dubstep pioneer Artwork, Jasper James and Dense & Pika all line up for a huge gathering. On the 23rd Reboot joins the party alongside Luka Agnelli and Mirko Di Florio. The 30th features Nathan Barato with a special guest still to be added, before a huge closing event that will be announced for September 6th brings a close to a stellar 1st year programme for the Do Not Sleep brand.

Finally as the sun rises the huge glass wall framing the vista of Ibiza will capture the spirit of the party perfectly, Remember… “Cool Kids Do Not Sleep…”

Do not sleep, Privilege