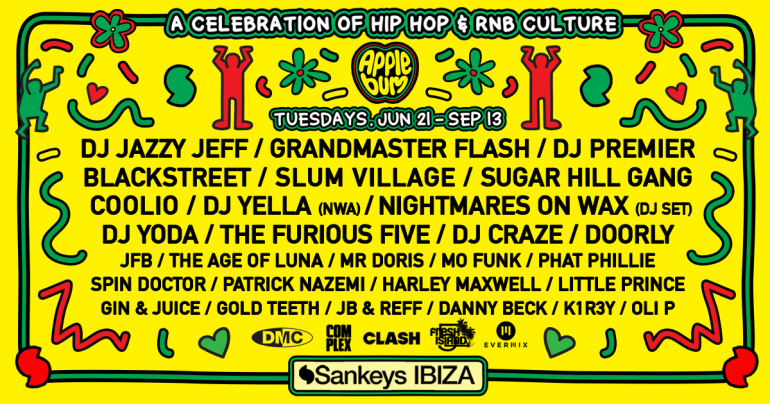 There’s only 9 weeks to go until the biggest and best celebration of Hip Hop and R&B culture touches down at Sankeys Ibiza for the first time thanks to UK Hip Hop party brand Applebum.

The full details of their debut, groundbreaking 13-week residency have just been confirmed, and with an array of some of the biggest names in the industry alongside a host of acclaimed resident DJs bringing the ruckus each week, Applebum looks set to make Hip Hop history with the first series of events of its kind on the White Isle.

Running every Tuesday night from June 21stuntil September 13th, Applebum will be bringing a taste of the old school showing Ibiza what Hip Hop is all about.

Kicking things off on the grand opening night of the first ever Hip Hop dedicated club residency on the Island is one of London’s most acclaimed turntablists, DJ Yoda. In week two, Applebum welcome the legendary hip hop producer DJ Premier and Nightmares on Wax, a.k.a. DJ EASE.

Get ready to take a journey back to the roots of Hip Hop as Applebum present one of their biggest inspirations, Grandmaster Flash for week 3 with one-half of a double Grammy-award winning duo with The Fresh Prince a.k.a. Will Smith, DJ Jazzy Jeff appearing in week 5.