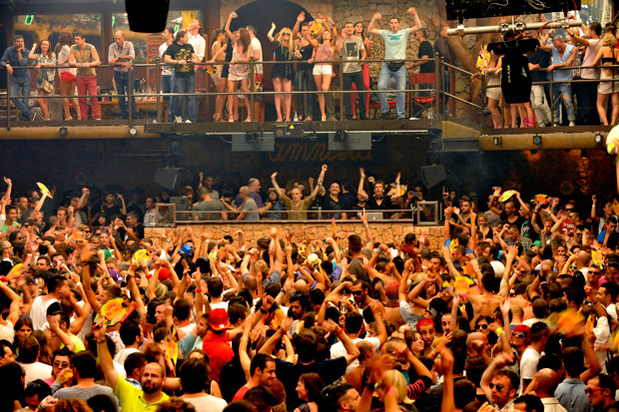 We could not think of any better way to see in the month of June – the beginning of the Ibiza season. It was the Amnesia opening party on the 31st May. It’s been the nights at Matinee, Cocoon, Music On, La Troya and Cream when you walk away from Amnesia wondering how the hell twill he next night out top that?! As we’re still yet to have anything less than an incredible night in Amnesia we’re full of energy and anticipation as to what the night will entail.

With it being a almost 7 months since the closing party we knew this was going to be a big one so rocking up in a pair of trainers and taking a siesta that day was the ammo we needed before we set off. We walked into the venue and straight to the terrace as Eats Everything was playing to a packed out, raving crowd. Catapulting into the Ibiza scene in recent years, it seems Eats Everything is being booked everywhere in clubland lately but that did not take away from the excitement of seeing him play on the infamous Amnesia terrace at one of the best parties in the world. Flitting between Eats Everything in the terrace to Maya Jane Coles in the Main room the atmosphere was electric in both and the party was only getting started.

The calibre and diversity of the DJs booked at Amnesia this season was magic, there was something for everyone to love and the opportunity try out some of the other talent that you may not necessarily seek out on your usual clubbing adventures.

Mar-T followed on from Eats Everything but as we love a bit of Adam Beyer we made our way to the Main Room for the beginning of his set at 5am. He played with maximum energy throughout and his set was getting better and better as it went on. The heavy techno set combined with the wild lasers darting about the room, it was easy to lose yourself among the euphoric feeling of being within such a wild crowd.

We had to make a mental note to move back into the terrace for Davide Squillace as the morning drew in. Squillace has been on the line up for the last few opening and closing parties for Amnesia – it was the perfect combination of one of our favourite DJs and sunrise on the Amnesia terrace.

Dancing on the Amnesia terrace when the sun has come up is probably one of out most favourite things to do ever and it seemed that way for everyone else too. The atmosphere was incredible and although the room was full there was space to throw some shapes. Squillace played some earth shattering tunes with twists and turns leaving our jaw dropping with every break and drop. It was powerful and probably the set of the night for us.

We could not pry ourselves away from the terrace and go back into the dark Main Room at 9am so the terrace was where we remained. We certainly didn’t feel it was nine in the morning at this point and had plenty left in us to see the night through. Apollonia was the final set of the night and it was certainly worth the wait. The trio of Shonky, Ghenacia and Dyed Soundroom were there to take us through the final hurdle until midday. At this point its always worth taking a look around the room at the characters still left. Everyone feeling that sense of togetherness that you’ve lasted until the end at an awesome party and wondering what we were going to do when the final whistle blows.

It was a strong set from Apollonia considering it was their first time playing Amnesia opening and they had a tough act to follow after Squillace. It’s nights like this, the reason we come to Ibiza season after season, to listen to some quality music by some of the best DJs in the world. The atmosphere and feeling you get in Amnesia is something that you cannot replicate anywhere else.

This season Amnesia have a strong schedule with Cocoon, Together, La Troya, Cream, Music on, Matinee and Amnesia Presents. For tickets to all the parties click here