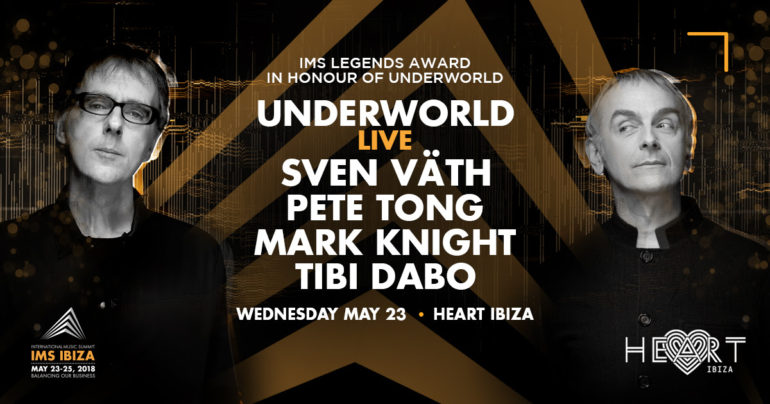 The International Music Summit (IMS) will recognise and pay tribute to an electronic music act that has helped write dance music history; Underworld, who are this year’s recipients of the IMS Legends Award. IMS today announce the full line up for Underworld’s Live show, which takes place after the celebratory dinner event at Heart Ibiza, bringing an intimate version of the duo’s exhilarating and dynamic live experience to the white isle and providing a rare opportunity to get close to one of electronic music’s biggest and most respected bands.

In addition to this extraordinary performance Underworld will be joined by a host of well-respected DJs, guest artists hand-picked by the band, who will bring extra energy to this special line up.

Leading the dancefloor charge is ‘Papa’ Sven Väth, the ultimate techno DJ, founder of Cocoon, strictly vinyl only performer and musical pioneer with a career spanning more than 30 years. Joining him is another true ambassador of UK dance music, an influential and familiar radio voice that has broken countless club records and has seeded the career of almost every DJ across the decades. With a thirst for everything that is new Pete Tong, a co-founder of IMS, will bring his innovative and fresh sound to Heart Ibiza.

Another unmissable artist to join the fully loaded line up is Mark Knight, Toolroom Records label boss and producer who has brought us some of the best-known dance tracks of our time, including ‘Downpipe’ (Mark Knight & D.Ramirez V Underworld), which remains one of the top-selling tracks from Toolroom’s extensive catalogue. Completing the line up is Tibi Dabo, the emerging Spanish DJ making waves in the dance scene that has been noticed by many established artists including Sasha who signed his first e.p ‘Ende’.

Underworld Live Plus Special Guests is produced in partnership with leading Ibiza venue Heart Ibiza and takes place on Wednesday 23 May at 24.00 following the IMS Legends Dinner celebratory banquet, honoring the musical and cultural legacy of the band.