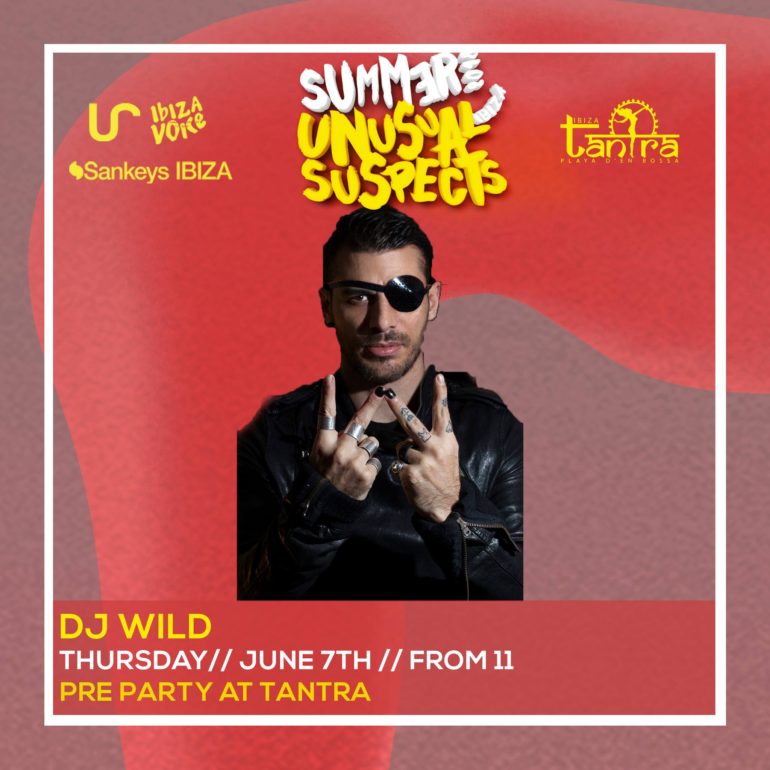 Unusual Suspects Ibiza has continued to grow since its launch in 2015, and this year it looks set for big things at Sankeys Ibiza. Already, we have seen the likes of Ilario Alicante, Shonky, Raresh and Molly behind the decks and this Thursday the US team will raise the bar again with the esteemed DJ W!ld, Shaun Reeves, Ryan Crosson and James McHale spinning the grooves. The Unusual Suspects Ibiza pre-party will take place at Tantra Ibiza on Thursday 7th June from 11pm, where DJ W!ld will be playing an exclusive one hour DJ set, giving a taste of what electronic music lovers can expect from his set at Sankeys Ibiza later that night.

Without hype or fanfare, DJ W!ld has grown from hero of the Parisian underground to an in-demand name who has played at some of the world’s most acclaimed clubs, including, Circo Loco at DC10, Panorama Bar in Berlin, Rex in Paris, Fuse in Brussels, Twilo in New York, Fabric in London – the list goes on. The Unusual Suspects Ibiza pre-party at Tantra Ibiza is a chance to see this eclectic master of electronic music behind the decks, up close and free of charge. His one hour set in the uplifting atmosphere of Tantra Ibiza is sure to build expectation for his headline set at Sankeys Ibiza later that night.

DJ W!ld will step into Tantra Ibiza’s recently refurbished DJ area, now known as The Red Box, where Ibiza’s cool and colourful come to dance and experience the incredible Void Acoustic sound system, while enjoying a range of amazing cocktails. Tantra Ibiza is in the heart of Playa d’en Bossa and every year, without fail, plays host to the hottest pre-parties on the island. Clubbers come and enjoy some of electronic music’s biggest names in an intimate setting, free of charge. Many come back after the clubs, when Tantra Ibiza’s hugely talented resident DJs are on hand to provide the soundtrack to unmissable after-parties.

Join the party at Tantra Ibiza from 11pm on 7th June and then at Sankeys Ibiza from midnight.

To purchase tickets to the events, click here. To inquire about VIP tables, click here or email vip@ibizadiscoticket.com for further information.