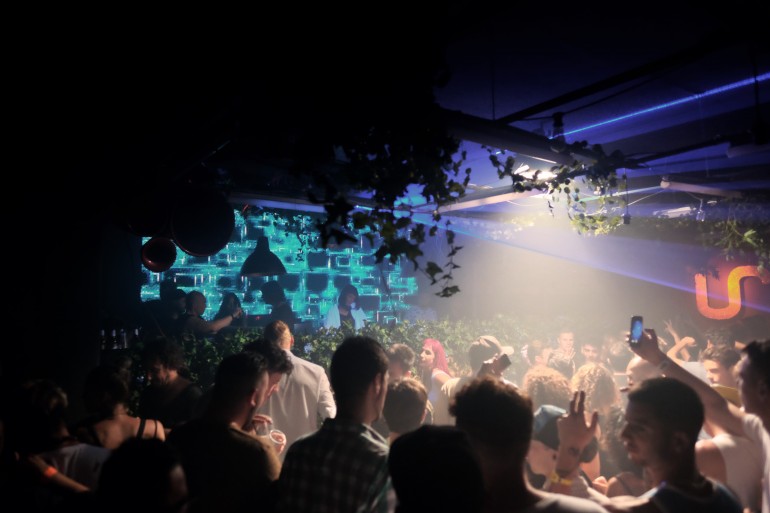 It takes something pretty special to maintain a winter party in Ibiza. Unusual Suspects pulled that off and now takes that momentum into the summer giving minimal techno a home on the island, with mostly Romanian and Berlin based DJs playing every Thursday. Rhadoo, Margaret Dygas, Petre Inspirescu and Barac are just some of the big names on the bill.

I entered the club in a rush, arriving to see the second half of Frank Storm playing a powerful set, the Italian, known for his sophisticated touch already had the crowd grooving to his solid beats. Looking around the basement, it was evident that the team this year have gone all out with the event production, creating a distinct decor, exclusive to the night. Unusual Suspects, one of the most underground nights on the island, have managed to turn Sankeys’ dirty downstairs basement into a vibey and cavernous interior. Vines included.

Heading to the bar to grab a drink, I noticed the wooden crates and steel drums littering the floor matched the criminally good sounds emanating from the speakers. The bar is decked out with the same crates and looking up, there are amber lights hanging down from the already low ceiling creating a deep dark and cocooned space that meshes you in to the dancefloor beats. There’s something about a basement bathed in amber light that evokes visions of an embryonic existence, human spirit kept alive by only a beat. Maybe that’s me getting too deep there but it’s a very human experience that’s prompted by technology. The irony.

Returning to the dancefloor and Frank Storm is wrapping up his set, making the most of Sankeys’ world renowned sound system with a deep and dark number and the crowd is lapping it up. A rolling groovy bassline announces the beginning of Bucharest resident Barac’s set. The ceiling lights dip from amber to red and Barac, known for evolving the Romanian sound with melody is coaxing the crowd to join him on a more enchanting journey. The pace initially slows and the crowd quickly adjusts, finding their groove in the warm beats and layered abstract sounds.

After a quick detour up to the hot and sweaty terrace, it’s a welcome return to the basement where Barac is one hour into his set and drops a catchy vocal track, Cookie Jar (by an artist we’ll never know from the Curtea Veche label) that had the crowd exploding with energy! Big face-hurting smiles abound on the dancefloor and by the time Berlin based Janina jumps on the decks, the crowd is ready for anything. Janina did not disappoint, bringing futuristic cuts and spacey vibes into the mix to an appreciative crowd, who were rewarded by one final trick in the production kitty, lasers.

Guido Schneider was last on the bill and brought it home, the crowd had barely thinned out and were still going strong as this weary dancer made her way home.

Unusual Suspects is not your usual party and is must visit for techno lovers this summer. Sankeys, known for it’s largely English following has managed to cultivate a mixed European crowd thanks to its dedication to the Romanian sound and strong following forged during the winter. Barac is back at Sankeys 25th August, Margaret Dygas plays on the 28th July.

For tickets to Unusual Suspects each week click here. Or if you fancy your parties with a little more VIP then get a quote for a table.